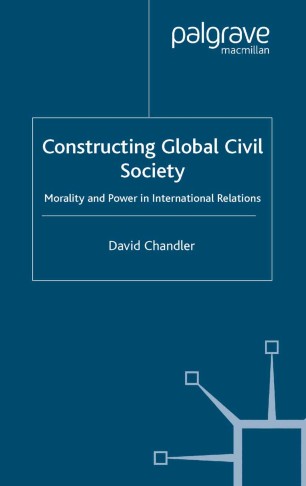 Morality and Power in International Relations

Global Civil Society is a crucial concept in International Relations today, used as both a description of new mechanisms of non-state actor and NGO engagement in international policy-making and as a normative political project of international change. David Chandler critically investigates the claims made by the advocates of global civil society, analyzing the limits of the concept as a way of describing actual policy processes and the political dynamics behind the search for an international source of collective ethical values and social change.

'This is an important critique of normative and practical projects for 'global civil society.' Chandler identifies the disturbingly elitist and anti-democratic elements of the programs that claim to be the only serious alternatives to the unaccountable and undemocratic mechanisms of contemporary global governance.' - Craig N. Murphy, M. Margaret Ball Professor of International Relations, Department of Political Science, Wellesley College, USA

'Within the English literature on global civil society this book stands out as an important contribution for manifold reasons. First of all it accurately distinguishes between the empirical approach and the normative one. From the empirical point of view David Chandler's sharp analysis explains the reasons which are behind the increasing success of the notion of 'global civil society' within the Western academic culture, journalist lexicon, and political rhetoric. From the normative point of view Chandler emphasizes a telling coincidence: on one hand, we are witnessing a serious crisis of domestic political arenas, paralysed as they are because of the lack of legitimacy, responsiveness and accountability of democratic regimes. On the other hand, there is a diffuse expectation that radical changes can result from the demolition of all domestic frontiers. The highest merit of the book lies in its realist attitude towards the globalist idealism. According to Chandler, the success of the notion of 'global civil society' is much more a consequence of the crisis of Western democracies than an expression of a new, real dimension of international relations. Globalist idealism and democratic malaise are two sides of the same coin.' - Danilo Zolo, Professor of Politics, University of Florence, Italy