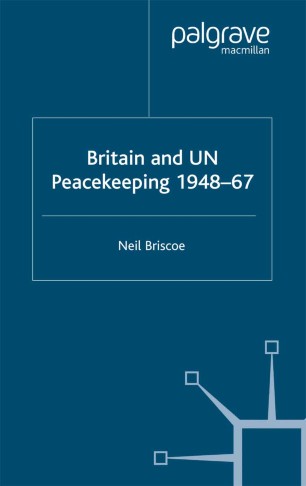 Britain was arguably the single greatest catalyst and beneficiary of UN peacekeeping operations during the post-war period. This book analyses the reasons for this, including the post-colonial conflicts which Britain handed the UN and its determination to ensure that peacekeeping evolved in a manner compatible with UK national interests. Despite initial ambivalence about letting the UN run military operations, Britain repeatedly used the organization, to shed colonial responsibilities, save face, share policing burdens, and stabilise conflicts in sensitive regions. This comprehensive survey first examines UK experience with antecedents of UN operations, notably 19th century colonial policing and missions set up under the League of Nations. It then analyses British efforts to influence, contain and exploit individual UN operations, including the Emergency Force established following the Suez Crisis (1956-67), the force in the Congo (1960-64), and the enduring operation in Cyprus (1967-). Also covered are several instances when British Governments preferred to intervene unilaterally, including in Jordan and Kuwait. One of the main contributions of the book is the detailed analysis of internal UK Government and UN files, which the author uses to reconstruct the policy making process. The book also sheds light on the peacekeeping policies of certain other key states, particularly the US and USSR. Finally, the account addresses some issues of contemporary relevance, including the tension between neutrality and impartiality, peacekeeping in a semi-permissive environment, and the use of force.

NEIL BRISCOE is UN Programme Manager in the Conflict and Humanitarian Affairs Department of the UK Department for International Development. For most of the period 1989-99 he worked for the UN Secretariat, first on peacekeeping and Security Council issues and then as a political officer in the Executive Office of the Secretary-General. He has degrees from Cambridge, Yale and Oxford Universities, including a D.Phil in International Relations.