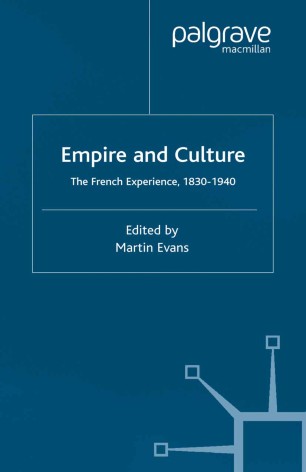 By 1931, the time of the huge Colonial Exhibition in Paris, France had the second largest empire in the world extending to the four corners of the globe. Yet, intriguingly the multi-various impact of the empire upon French culture and society has been largely ignored by historians. This volume aims to redress this balance and will explore how the idea of empire was expressed in film, photography, painting and monuments. It analyzes how the image of the universal, civilising mission saturated French society during the first half of the Twentieth century. In particular it examines how the subject peoples of the empire were represented in art and fiction. In this way the volume underlines that there was not just one single image of empire but many ranging from the extreme right to the extreme left. It contains an in-depth consideration not just of the triumphalist images of empire but the oppositional ones, most notably the surrealists, which directly challenged the emergent colonial consensus.

MARTIN EVANS is Reader in Contemporary History at the University of Portsmouth. He is the author of The Memory of Resistance: French Opposition to the Algerian War 1954-62 (Oxford: Berg, 1997) and the co-author (with Emmanuel Godin) of France 1815-2003 (London: Edward Arnold, 2004). He is also the co-editor of War and Memory in the Twentieth Century (Oxford: Berg, 1997) and The Algerian War and the French Army: Experiences, Images, Testimonies (London: Palgrave Macmillan, 2002). He is presently writing a history of contemporary Algeria to be published by Yale University Press.