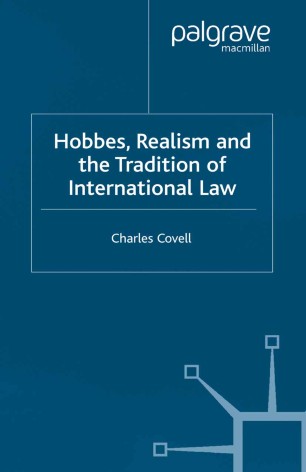 Hobbes, Realism and the Tradition of International Law

Charles Covell considers the poltical thought of Thomas Hobbes in relation to the tradition of international law, and with the intention to challenge the reading of Hobbes as the exponent of the realist standpoint in international thought and practice. The relation of Hobbes to international law is explained through attention to the place that he occupies among the modern secular natural law thinkers, such as Grotius, Pufendorf, Wolff and Vattel, who founded the modern system of the law of nations.

CHARLES COVELL was educated at the City of London School and Gonville and Caius College, Cambridge. Since 1990, he has taught law and politics at the Unversity of Tsukuba in Japan, where he is Associate Professor of Jurisprudence in the Institute of Social Sciences. His publications include the following books: The Redefinition of Conservatism: Politics and Doctrine (1986); The Defence of Natural Law: A Study of the Ideas of Law and Justice in the Writings of Lon L. Fuller, Michael Oakeshott, F.A. Hayek, Ronald Dworkin and John Finnis (1992); Kant, Liberalism and the Pursuit of Justice in the International Order (1994); Kant and the Law of Peace: A Study in the Philosophy of International Law and International Relations (1998).