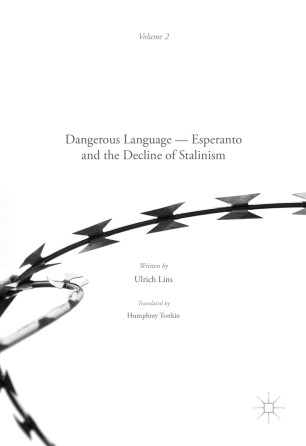 Dangerous Language — Esperanto and the Decline of Stalinism

This book examines the rise of the international language Esperanto, launched in 1887 as a proposed a solution to national conflicts and a path to a more tolerant world. The chapters in this volume examine the position of Esperanto in Eastern Europe during the Cold War; in particular it explores Stalin’s final years and the gradual re-emergence of the Esperanto movement. At first, its revival was limited to the satellite countries, especially Bulgaria and Poland, but, with Stalinism’s gradual retreat, Esperanto organizations reappeared in most East European countries and eventually in the Soviet Union itself. The progress was uneven, and its details reveal the stresses and strains that became apparent as the solidarity of the Soviet bloc declined. This book will appeal to a wide readership, including linguists, historians, political scientists and others interested in the history of the twentieth century from the unusual perspective of language. This volume is complemented by the sister volume Dangerous Language — Esperanto under Hitler and Stalin which offers a concentration on the creation and early emergence of Esperanto as an international language.

Ulrich Lins received his doctorate at the University of Cologne, Germany, with a dissertation on Japanese nationalism (published in 1976). For thirty years he worked for DAAD, the German Academic Exchange Service in its headquarters in Bonn, and served two tours of duty as head of its office in Tokyo. He has edited numbers of books in German and Japanese on German-Japanese relations and on Germany following reunion. The present volume, written originally in Esperanto, has appeared in German, Italian, Japanese, Korean, Russian, and Lithuanian translations.
Humphrey Tonkin is President Emeritus of the University of Hartford, USA, where he served as University Professor of Humanities. He studied English and comparative literature at Cambridge and Harvard (Ph.D. 1966) and has written widely on literary topics and on international education and language policy. He has published numbers of translations from English to Esperanto and from Esperanto to English.

“The history of Esperanto is usually related by Esperantists, for Esperantists — and in Esperanto. This expanded translation of Ulrich Lins’s decades of research into the persecution of Esperantists makes for fascinating reading well beyond that community. Esperanto has no homeland, and for that very reason drew the ire of nationalists and other ideologues from across the political spectrum. This is, in short, nothing less than an alternative history of nationalism.” (Michael D. Gordin, Rosengarten Professor of Modern and Contemporary History, Princeton University, US)

“This book gives a carefully supported account of a crucial aspect of the Esperanto movement’s history, focusing on political repression by totalitarian regimes, especially those of Hitler and Stalin. It also sheds light on opposition elsewhere and is eye-opening for anyone interested in language policy and global communication.” (Ulrich Ammon, Emeritus Professor of Germanic Linguistics at Duisberg-Essen University, Germany)