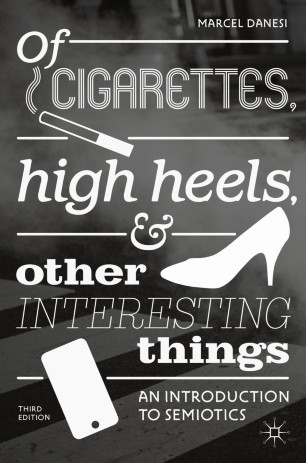 Of Cigarettes, High Heels, and Other Interesting Things

An Introduction to Semiotics

This book deals with one the most interesting aspects of human life—the search for meaning. It discusses how the science of semiotics is equipped to provide insight on what meaning is and how we produce it. Why is it that certain people routinely put their survival at risk by smoking? Why is it that some women make locomotion difficult for themselves by donning high-heel footwear? Are there unconscious forces at work behind such strange behaviors? This book will attempt to answer such questions by claiming that these behaviors are meaningful in culture-specific ways. The discipline that studies such behaviors and their relation to meanings is called semiotics. Semiotics probes the human condition in its own peculiar way, by unraveling the meanings of signs, which motivate not only the wearing of high heel shoes, but also the construction of words and art forms. Now in its third edition, this landmark introduction to semiotics has been updated with a wealth of new content, focusing on the many developments in digital culture since the previous edition. With the addition of topics such as memes, Selfies, social media profiles, and even Mafia discourse, the new edition comprehensively covers new trends in culture while streamlining treatments of basic semiotics contents.

Marcel Danesi is Professor of Semiotics and Anthropology at the University of Toronto, Canada. He is renowned for his work in several areas of semiotic study, including pop culture and metaphor. He has been a guest on several broadcast outlets, including National Public Radio. Among his major recent publications are The History of the Kiss (2013) and Murder in Plain English, with Michael Arntfield (2016). His work has been featured in the New York Times, Toronto Star, and Psychology Today, among other print publications. He is currently Editor-in-Chief of Semiotica, the leading journal in semiotics.