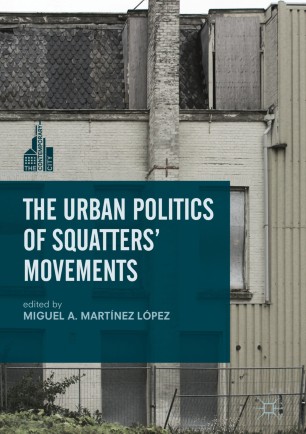 The Urban Politics of Squatters' Movements

Part of the The Contemporary City book series (TCONTCI)

This volume sheds light on the development of squatting practices and movements in nine European cities (Madrid, Barcelona, Seville, Rome, Paris, Berlin, Copenhagen, Rotterdam and Brighton) by examining the numbers, variations and significant contexts in their life course. It reveals how and why squatting practices have shifted and to what extent they engender urban movements. The book measures the volume and changes in squatting over various decades, mostly by focusing on Squatted Social Centres but also including squatted housing. In addition, it systematically compares the cycles, socio-spatial structures and the political implications of squatting in selected cities. This collection highlights how squatters’ movements have persisted over more than four decades through different trajectories and circumstances, especially in relation to broader protest cycles and reveals how political opportunities and constraints influence the conflicts around the legalisation of squats.

“The book achieved its aim in terms of tracing the change of the European squatter movement comprehensively. ... this vivid history of squatters’ battle against urban renewal, regeneration, and gentrification in Europe after the 1970s has a wide appeal for activists and researchers of urban social movements, gentrification, and urban policy.” (Meric Kirmizi, Sociological Research Online, February 10, 2019)

“The collection of essays presented in The Urban Politics of Squatters’ Movements presents a valuable resource for researchers by establishing a replicable methodology for application in different localities, having demonstrated the process for developing a community-driven knowledge bank spanning many geographies to add significant value to first-hand accounts from squatter communities. The act of mapping squatting activity in this way also provides a unique resource for researchers, decision-makers and policy developers … .” (Jack Barton, Housing Studies, Vol. 34 (6), 2019)

“The Urban Politics of Squatters’ Movements therefore represents a useful contribution allowing readers to familiarize themselves with the complex and variegated history of squatting in Western Europe. … The edited volume is definitely recommended for activists, students and scholars willing to learn more about the histories of the squatting movements in Western Europe, emphasizing the importance of considering the (complex and dynamic) relations between squatters, formal institutions and urban processes of transformation.” (Cesare Di Feliciantonio, Antipode, April, 2019)

“This book is a collaborative product by a group of activists, academics and researchers working together, both online and offline, on squatting and squatters’ movements throughout Europe. … The book is a must for those working on squatters’ movements and will also be of benefit to researchers, academics and students in the wider field of urban studies, especially those studying urban social movements.” (International Journal of Urban and Regional Research, February, 28, 2019)

“The Urban Politics of Squatters’ Movements is an important contribution from an empirical perspective. It does not just provide a variegated description of the main features of squatting in the nine cities under analysis; it also looks at the past decades of squatting with a demystifying lens, revealing the constraints and repression to which squatter movements are always subjected.” (Carlotta Caciagli, Partecipazione e Conflitto, Vol. 11 (2), 2018)
“The Urban Politics of Squatters’ Movements provides a valuable addition to a growing body of literature documenting and analysing a modern history of urban squatter's movements across Europe. … this collection offers a detailed account of an array of urban squatting movements across Europe, the contents of which will be of interest to all sociologists concerned with social organisation, social change, and the social movements that arise out of (and contribute to) these key facets of sociological interest.” (Rhiannon Craft, thesociologicalreview.com, December, 2018)
“Rarely the subject of social movement studies, the squatter movements have been nevertheless extremely important as incubator of new codes and performances. Beyond prefigurative practices, squatted social centers have had political effects as well. This valuable collection starts filling this gap, offering rich evidence on the squatters' culture and performances. within a geographically broad and historical deep perspective.” (Donatella della Porta, Director of Centre of Social Movements Studies, Scuola normale superiore, Firenze, Italy and author of Social Movements in Times of Austerity: Bringing Capitalism Back Into Protest Analysis)

”The Urban Politics of Squatters' Movements is the first systematic account we have of how and why squatting movements rise, fall, and rise again.  Based on clear, concise, but still in-depth analyses of cycles of squatting in nine cities, this vital book deepens our knowledge of the scope and importance of squatting movements across Europe – especially the rise and persistence of squatted social centers – and how they relate to both housing struggles and waves of more general protest.  The Urban Politics of Squatters' Movements belongs on the shelf of anyone interested in the condition of urbanism in Europe – and especially in understanding those movements that, through their actions, make it clear that another city is indeed possible.” (Don Mitchell, Professor, Uppsala University, Sweden and author of The Right to the City: Social Justice and the Fight for Public Space and general editor of Revolting New York: How 400 Years of Riot, Rebellion, Uprising, and Revolution Have Shaped a City)

”Nine West European cities that have been sites of enduring squatters movements provide the basis of this richly empirical as well as comparative study by scholar-activists, all involved in the Squatting Europe Kollective (SqEK). Parallels as well as distinct differences between Northern and Southern Europe come to the fore, and the chapters reveal how, in the period from the 1960s to the very present, nationally and locally specific conditions have shaped the agendas, cycles, forms of legalization, repression and cooptation of this very specific type of urban movement. If you are tired of the recent wave of nostalgic literatures romanticizing past squatting movements, this collection by SqEK members provides a perfect antidote: historical analysis that is forward-looking and contextualizing squatting movements within respective conjunctures of urban protest. ” (Margit Mayer, Professor, Free University of Berlin, Germany)