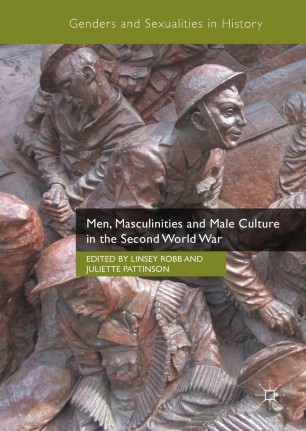 Men, Masculinities and Male Culture in the Second World War

This edited collection brings together cutting-edge research on British masculinities and male culture, considering the myriad ways British men experienced, understood and remembered their exploits during the Second World War, as active combatants, prisoners and as civilian workers. It examines male identities, roles and representations in the armed forces, with particular focus on the RAF, army, volunteers for dangerous duties and prisoners of war, and on the home front, with case studies of reserved occupations and Bletchley Park, and examines the ways such roles have been remembered in post-war years in memoirs, film and memorials. As such this analysis of previously underexplored male experiences makes a major contribution to the historiography of Britain in the Second World War, as well as to socio-cultural history, cultural studies and gender studies.

Linsey Robb is Lecturer in History at Northumbria University, UK, and is a social and cultural historian specialising in the study of gender in the Second World War. Key publications include Men at Work (Palgrave, 2015), and Men in Reserve (2017), co-authored with Juliette Pattinson and Arthur McIvor. She is currently researching British conscientious objection during the Second World War.
Juliette Pattinson is Reader at the University of Kent, UK, and a gender historian specialising in the Second World War. Key publications include Behind Enemy Lines (2007), Men in Reserve (2017)  and three co-edited collections: Fighting for Britain? (2015), British Cultural Memory and the Second World War (2014) and War in a Twilight World (2010).