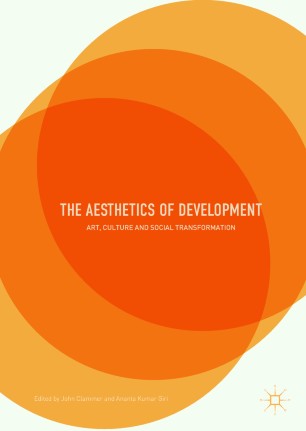 The Aesthetics of Development

Through a unique range of theoretical and practical case studies, this collection considers the relationship between the arts (understood as the visual arts, crafts, theatre, dance, and literature) and development, creating both a bridge between them that is rarely explored and filling in concrete ways the content of the “culture” part of the equation “culture and development”. It includes manifestations of culture and the ways in which they relate to development, and in turn contribute to such pressing issues as poverty alleviation, concern for the environment, health, empowerment, and identity formation. It shows how the arts are an essential part of the concrete understanding of culture, and as such a significant part of development thinking -  including the development of culture, and not only of culture as an instrumental means to promote other development goals.

John Clammer is Professor at the School of Liberal Arts and Humanities at O.P. Jindal Global University. He was previously Professor of Sociology at the Institute of Advanced Studies in Sustainability at the United Nations University, Tokyo. He has held titular positions at the Universities of Hull, Singapore, and Sophia University, Tokyo. His work focuses primarily on the interface of culture and development and his recent major books include Art, Culture and International Development: Humanizing Social Transformation (2015), and Cultures of Transition and Sustainability (2016).

Ananta Kumar Giri is Professor at the Madras Institute of Development Studies, Chennai, India. He has taught and done research at Aalborg University (Denmark), the Maison des sciences de l’homme (Paris), the University of Kentucky, the University of Frieburg and the Humboldt University (Germany), and Jagiellonian University (Poland). His research interests focus on social movements and cultural change, theories of self, culture and society, and creative streams of education, philosophy and literature. He has written or edited around two dozen books, including Philosophy and Anthropology: Border Crossings and Transformations (2013) and New Horizons of Human Development (2015).