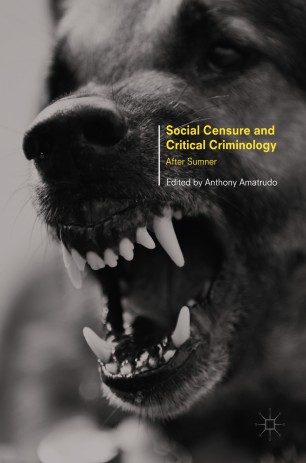 This edited collection focuses on the sociology of 'social censure' – the sociological term advocated by Colin Sumner in his seminal writing of the 1980s and 1990s. Social censure has become increasingly important in contemporary criminological writing. This can especially be seen in recent writing on gender and race and also in terms of the way that the state's relationship to crime is now understood. This collection addresses a deficit in the published literature and both revisits themes from an earlier era and looks forward to the development of new writing that develops Sumner’s seminal work on social censure. The contributors are drawn from leading scholars from across the Social Sciences and Law and they address a wide range of issues such as: race, youth justice, policing, welfare, and violence. The resulting volume is an interdisciplinary text which will be of special interest to scholars and students of Critical Criminology and Socio-Legal Studies, as well as those interested in the operation of the criminal justice system and criminological theory.

“Through the last four decades Colin Sumner has offered some of the most inspiring and sophisticated contributions to critical theories of crime. His major concepts such as censure and the death of deviance have remained both seminal and controversial. This book provides an excellent collection of discussions of his work by some outstanding scholars, and shows that even in these reactionary times radical perspectives are alive and flourishing.” (Professor Robert Reiner, Emeritus Professor of Criminology, London School of Economics & Political Science, UK)

“It sometimes appears that labelling theory, the sociology of deviance and critical criminology have only nostalgic value today, but this lively and accessible collection demonstrates, by way of a focus on Colin Sumner’s theory of 'censure', how hugely relevant this radical tradition remains today.” (Professor Robert Fine, Emeritus Professor of Sociology, University of Warwick, UK)