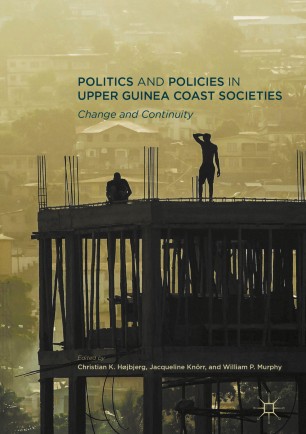 This book examines the radical changes in social and political landscape of the Upper Guinea Coast region over the past 30 years as a result of civil wars, post-war interventions by international, humanitarian agencies and peacekeeping missions, as well as a regional public health crisis (Ebola epidemic). The emphasis on ‘crises’ in this book draws attention to the intense socio-transformations in the region over the last three decades. Contemporary crises and changes in the region provoke a challenge to accepted ways of understanding and imagining socio-political life in the region – whether at the level of subnational and national communities, or international and regional structures of interest, such as refugees, weapon trafficking, cross-border military incursions, regional security, and transnational epidemics. This book explores and transcends the central explanatory tropes that have oriented research on the region and re-evaluates them in the light of the contemporary structural dynamics of crises, changes and continuities.

Christian K. Højbjerg was Associate Professor at the University of Aarhus, Denmark, and for many years a member of the research group “Integration and Conflict along the Upper Guinea Coast” at the Max Planck Institute for Social Anthropology in Halle/Saale, Germany. He published extensively on a range of subjects, including historical memory, ritual and social organization, conflict and emergent political orders, identity and difference, and the role of reflexivity in shaping both social change and theoretical change.

Jacqueline Knörr is Head of of the research group “Integration and Conflict along the Upper Guinea Coast” at the Max Planck Institute for Social Anthropology and Extraordinary Professor at the Martin Luther University in Halle/Saale, Germany. Her research and publications focus on issues of identity, integration, migration, diaspora, gender, creolization, (trans)nationalism and childhood. Her regional foci are West Africa and Indonesia.

William P. Murphy is Research Affiliate in the Department of Anthropology, Northwestern University, USA and research partner of the research group “Integration and Conflict along the Upper Guinea Coast” at the Max Planck Institute for Social Anthropology in Halle/Saale, Germany. His early research focused on secrecy and socio-political hierarchy in Liberia, and on the language and strategies of chiefly political succession in Sierra Leone. His current research examines the language and organization of violence in civil war, using case material from Liberia and Sierra Leone.

“These essays constitute a body of knowledge that policy planners working in the Upper Guinea Coast region should know about and include in their work. The authors and editors do not specifically address, however, the challenges of actually transferring this knowledge and making sure it is integrated into the policy process.” (Mary H. Moran, Anthropos, Vol. 114 (2), 2019)