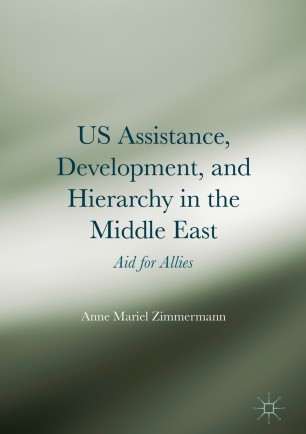 US Assistance, Development, and Hierarchy in the Middle East

What does US aid “buy” in the Middle East? Drawing on extensive primary source research, this book examines the role and consequences of US aid to three countries in the Middle East. The author argues that the political survival strategies of incumbent leaders in Egypt, Israel, and Jordan shaped not only the type of aid that these countries received from the US, but also its developmental and geopolitical impact. Leaders who relied heavily on distributing selective benefits to their ruling coalitions were more likely to receive forms of US aid that complemented their distributive political economies and undermined the state’s developmental capacity, which simultaneously rendered them more dependent on US resources, and more likely to cede fragments of their sovereignty to their major donor. Non-distributive leaders, however, could reap the full benefits of highly discretionary and technologically sophisticated aid, incorporating it into developmental policies that rendered them progressively less dependent on Washington—and better able to say “no” when it was in their best interest.

“Aid for Allies is a sophisticated and well executed comparative study of the developmental and political effects of US foreign aid in the Middle East. It eschews simplistic approaches to explore not just how US aid varies but also how Middle Eastern regimes harnessed that aid. The work is a significant contribution to the political economy literature on the Middle East and helps illuminate critical questions about US foreign policy in the region.” (Pete W. Moore, Associate Professor of Politics, Case Western Reserve University, USA)

“Zimmermann pulls the mask off the geopolitics of international aid. In careful studies of U.S. and Israeli, Jordanian, and Egyptian relations, she reveals aid as a bargain between Washington, which seeks influence over its client states, and local leaders, who look to ensure their own political survival. In these cases, at least, the needs of the leaders drove aid flows, not the other way around, with major implications for the effective sovereignty of the client regimes. Ironically, those clients who were more dependent on aid to sustain themselves in office suffered worse development outcomes and lost more sovereignty to the United States. A well-crafted study that provides new insights into the troubled international history of the Middle East.” (David A. Lake, Professor of Social Science, University of California, San Diego, USA)

“Anne Zimmermann's remarkable book on the political and economic consequences of US foreign assistance to the Middle East is the most authoritative book on this subject matter. Zimmermann argues that US aid is geo-politically motivated. As such it prioritizes incumbent survival. This very logic guiding US aid has affected state development capacities across Middle Eastern recipient countries and has had varying influences on democratic and authoritarian regimes.  Relying on the case studies of Egypt, Israel and Jordan to unpack her argument,  Zimmermann has put together a carefully researched book that will revise much of our conventional wisdom about US foreign aid to the region.” (Amaney Jamal, Professor of Politics, Princeton University, USA)