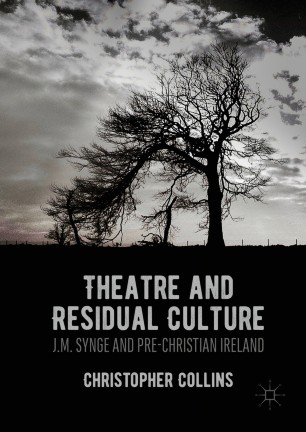 This book considers the cultural residue from pre-Christian Ireland in Synge’s plays and performances. By dramatising a residual culture in front of a predominantly modern and political Irish Catholic middle class audience, the book argues that Synge attempted to offer an alternative understanding of what it meant to be “modern” at the beginning of the twentieth century. The book draws extensively on Synge’s archive to demonstrate how pre-Christian residual culture informed not just how he wrote and staged pre-Christian beliefs, but also how he thought about an older, almost forgotten culture that Catholic Ireland desperately wanted to forget. Each of Synge’s plays is considered in an individual chapter, and they identify how Synge’s dramaturgy was informed by pre-Christian beliefs of animism, pantheism, folklore, superstition and magical ritual.

Christopher Collins is Assistant Professor of Drama at the University of Nottingham, UK. From 2010-2015 he taught at the Department of Drama in Trinity College Dublin, where the research for this book was conducted. He has published extensively on Synge’s plays and performances, including a companion to The Playboy of the Western World (2016).

“The book is extremely well documented, drawing on extensive archival material and proposing careful readings of the philosophical texts which had a lasting influence on Synge’s writings, prominent amongst which is James Frazer’s The Golden Bough (1890). In historicizing Synge’s plays and taking folk belief seriously, Collins’s book offers an important contribution to postcolonial readings of the Irish Literary Revival and will be of enduring interest to scholars of Synge and of Edwardian Ireland.” (Hélène Lecossois, Theatre Research International, Vol. 42, (3), October, 2017)

“While it might appear a purely historical book, Ireland, Memory and Performing the Historical Imagination ensures that the past is interrogated with the lens of current concerns—theatrically, theoretically, and philosophically." (Brian Singleton, Theatre Journal, Vol. 68, (3), September 2016)

“This is a major intervention in Irish theatre history, combining deep archival research with cutting-edge use of theories that not only examines in detail J. M. Synge's dramatization of pre-Christian culture, but also sheds light on the impact of this culture in theatrical form on his contemporary audience.” (Brian Singleton, Samuel Beckett Chair of Drama & Theatre, Trinity College Dublin)

“Christopher Collins’s monograph is the most important volume on Synge to be published in decades. It is informed by original research, careful historicization (of the late nineteenth century in Ireland in particular), relevant critical theory and above all detailed and consistently insightful readings of Synge’s plays themselves.This is a major study of the greatest Irish playwright, actively engaged in articulating the important and still relevant dramaturgic and philosophic issues raised in and by Synge’s work.” (Anthony Roche, Professor of English, Drama and Film, University College Dublin, Ireland)

“In Theatre and Residual Culture Christopher Collins impressively combines historical detail with theoretical insight to reimagine the work of J. M. Synge in terms of pre-Christian culture. Heavyweight scholarship is rendered with lapidary lightness in a book that will open a new chapter in the study of Synge's plays.” (Paul Murphy, Brian Friel Centre for Drama, Queen's University Belfast, UK)