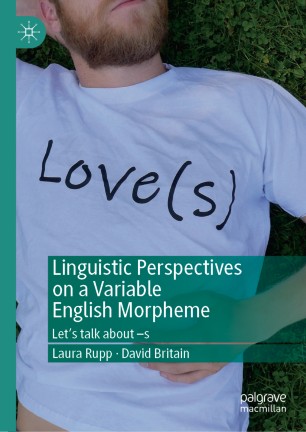 This book investigates –s marking in English verbs, specifically its manifestations in main verbs, in the past tense of BE, and in existential constructions. It embraces the many ways in which –s marking varies across the English speaking world, and considers both how it arose in these places historically and the ways in which it has since developed. The authors propose a story which holistically accounts for these different manifestations of –s, drawing upon evidence from a wide range of subdisciplines in linguistics, including sociolinguistics, generative syntax, historical linguistics, dialectology, and discourse-pragmatics. This book will be of particular interest to students and scholars in these and related fields.

Laura Rupp is a Universitair Hoofddocent Engelse Taalkunde at Vrije Universiteit Amsterdam, The Netherlands. Her research interest embrace grammatical variation and change, the interface between grammar and discourse-pragmatics, and (diversity in) English pronunciation. Her most recent research projects have been on verbal –s in English and variation in the use of articles.

David Britain is Professor of Modern English Linguistics at the University of Bern, Switzerland. His research interests embrace language variation and change, varieties of English (especially in Southern England, the Southern Hemisphere and the Pacific), dialect contact and attrition, dialect ideologies, and the dialectology-human geography interface, especially with respect to space/place, urban/rural and the role of mobilities.