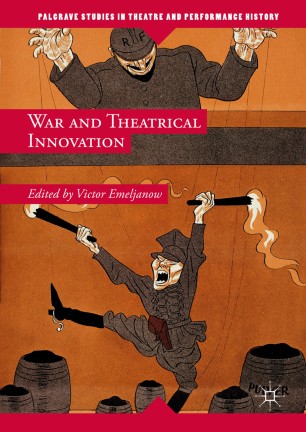 This book examines the relationship between wartime conflict and theatre practices. Bringing together a diverse collection of essays in one volume, it offers both a geographically and historically wide view of the subject, taking examples from Britain, Australia and America to the Middle East, Korea and China, and spanning the fifth century BCE to the present day. It explores the ways in which theatre practices have been manipulated for use in political and military propaganda, such as the employment of scenographers to work on camouflage and the application of acting methods in espionage training. It also maps the change in relationships betweenperformers and audiences as a result of conflict, and the emergence of new forms of patronage during wartime theatre-going, boosting morale at periods when social structures and identity were being destabilized.

Victor Emeljanow is Emeritus Professor in the School of Creative Industries at the University of Newcastle, Australia, and General Editor of the e-journal Popular Entertainment Studies. He has published widely on subjects including the reception of Chekhov in Britain, the career of Theodore Kommisarjevsky, Beerbohm Tree's engagement with Ibsen on the West End, Victorian popular dramatists, and prisoner-of-war entertainments during the First and Second World Wars.