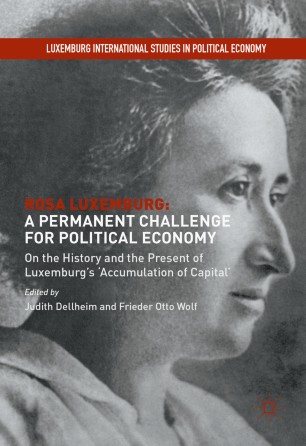 On the History and the Present of Luxemburg's 'Accumulation of Capital'

The book is based upon a call for papers and a conference to mark the 100th anniversary of Rosa Luxemburg's principal work, The Accumulation of Capital: A Contribution to an Economic Explanation of Imperialism, published in 1913. Eleven contributors from five different countries come together to discuss different issues and dimensions connected with Luxemburg's work and focus on its continuing relevancy. This collection investigates topics such as, the influences of Karl Marx and Maxim Kovalevsky, the imperialism debate in German social democracy, and the critical reception of Luxemburg's work from Marxist and feminist viewpoints.
By positioning Luxemburg's work in a historical context, this book offers an accessible and timely insight into the significance of The Accumulation of Capital and, more importantly, demonstrates why Luxemburg's legacy should live on.

Judith Dellheim is a senior research fellow at the Rosa Luxemburg Foundation, Berlin, Germany. She worked as a freelance scientific consultant from 2004–10, and has been politically active since her childhood. Her main research interests include the socio-ecological transformation of modern societies, solidarity economy, and political economy.
Frieder Otto Wolf is Honorary Professor of Philosophy at the Free University of Berlin, Germany. He has been a lecturer in philosophy at this institution since 1973, and became Honorary Professor in 2007. He has served as a fellow at the Rosa Luxemburg Foundation and sits on the advisory board of several journals.