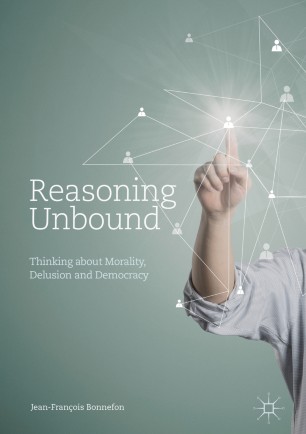 Thinking about Morality, Delusion and Democracy

This book argues that the science of reasoning will prove most useful if focused on studying what human reasoning does best - understanding people.  Bonnefon argues that humanity's unique reasoning abilities developed in order to handle the complexities of cooperative social life.  Accordingly, human beings became exquisite students of the minds of other people to predict the kind of decisions they make, and assess their character.  In particular, this volume explores the inferences humans make about the moral character of others, how they delude themselves about their own moral character, and the ways in which they can see through the delusions of others.  In conclusion, the book considers how to leverage the power of human reasoning in order to sustain democratic life.
This work will interest scholars and students working in fields including theory of mind, decision-making, moral cognition, critical thinking, experimental philosophy, and behavioural economics, as well as policy makers interested in how reasoning impacts our political understanding.

reasoning thinking Behaviorally informed policies What is special about human reasoning? naive utility calculus model rational speech act model psychology of intuition study of Moral character Cooperation-motivated beliefs Self-deluded reasoning psychology of democracy how we look at other voters decisions The Turing test how and why we judge others moral judgement morality in politics