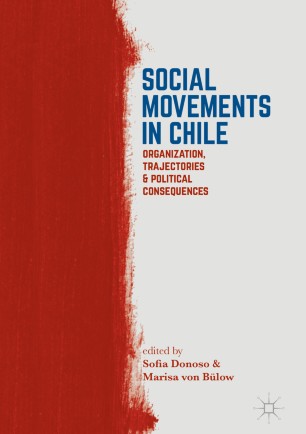 This book presents rich empirical analyses of the most important movements in Chile’s post-transition era: the Student Movement, the Mapuche Movement, the Labor Movement, the Feminist Movement, and the Environmental Movement. The chapters illuminate the processes that led to their emergence, and detail how actors developed new strategies, or revisited old ones, to influence the political arena. The book also offers contributions that situate these cases both in terms of the general trends in protest in Chile, as well as in comparison to other countries in Latin America. Emphasizing various facets of the debate about the relationship between “institutional” and “non-institutional” politics, this volume not only contributes to the study of collective action in Chile, but also to the broader social movement literature.

Sofia Donoso is Adjunct Research Fellow at the Centre for Conflict and Social Cohesion Studies (COES) associated to the Universidad de Chile, and the Pontificia Universidad Católica de Chile. Her research has been published in the Journal of Latin American Studies, Research in Social Movements, Conflicts and Change, as well as in several book chapters in edited volumes. She holds an MPhil and a PhD from the University of Oxford.
Marisa von Bülow is Professor of Political Science at the Universidade de Brasília and a researcher at Pontificia Universidad Católica de Chile. She is the author of various books, among them Building transnational networks: Civil society and the politics of trade in the Americas, and Social Movement Dynamics: new perspectives on theory and research from Latin America. She has also published several articles on social movements in Mobilization, Latin American Politics and Society, and other journals.