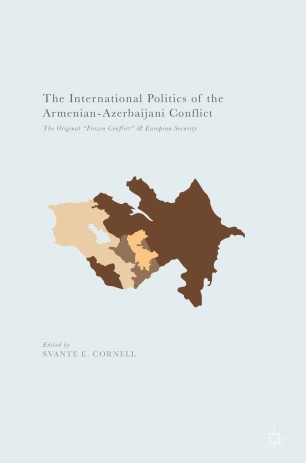 The International Politics of the Armenian-Azerbaijani Conflict

This book frames the Armenian-Azerbaijani conflict over Nagorno-Karabakh in the context of European and international security. It is the first book to focus on the politics of the conflict rather than the dispute itself. Since their emergence twenty years ago, this and other “frozen conflicts” of Eurasia have been affected by transformations in European security, and many ways absorbed into an ever fiercer geopolitical struggle for influence. The wars in Georgia and Ukraine brought greater attention to some unresolved conflicts, but not to the conflict between Armenia and Azerbaijan. As the contributors to this volume argue, the conflict merits much greater European attention, for several reasons: it is on a path of escalation, existing mediation regimes are dysfunctional, and as both Georgia and Ukraine have showed, any outbreak of serious fighting will force the EU to respond. This book thus explains the interlocking interests of Russia, Turkey, Iran, the EU and United States in the conflict, and analyzes the negotiation process and the conflict’s international legal aspects.

Svante E. Cornell is Director of the Central Asia-Caucasus Institute and Silk Road Studies Program, a Joint Center affiliated with Johns Hopkins University, US, and the Institute for Security and Development Policy. He is author of Azerbaijan since Independence and Small Nations and Great Powers: A Study of Ethnopolitical Conflict in the Caucasus.