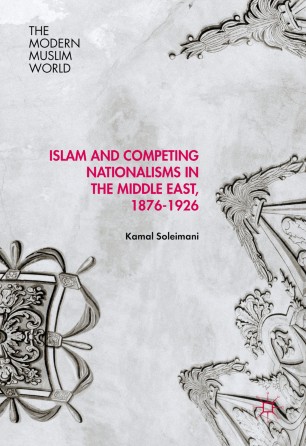 Islam and Competing Nationalisms in the Middle East, 1876-1926

Opposing a binary perspective that consolidates ethnicity, religion, and nationalism into separate spheres, this book demonstrates that neither nationalism nor religion can be studied in isolation in the Middle East. Religious interpretation, like other systems of meaning-production, is affected by its historical and political contexts, and the processes of interpretation and religious translation bleed into the institutional discourses and processes of nation-building. This book calls into question the foundational epistemologies of the nation-state by centering on the pivotal and intimate role Islam played in the emergence of the nation-state, showing the entanglements and reciprocities of nationalism and religious thought as they played out in the late nineteenth and early twentieth century Middle East.

Kamal Soleimani is a historian of the Modern Middle East and Islamic world. His research interests include Islamic political history and Arab , Kurdish, Persian and Turkish nationalism. He received his PhD from Columbia University in New York, USA. He has taught at Turkish and US universities.

“In contrast to theories of nationalism that downplay the significance of religion in the emergence of nationalist movements, Kamal argues that religion and nationalism have been closely intertwined in ways that had been obscured by the discourse of elites at the center of power, whose perspectives have, in turn, shaped subsequent scholarship. This book demonstrates a sophisticated knowledge of the theoretical literature on nationalism and makes an original contribution to this literature by challenging the Eurocentric assumption that nationalism is inevitably or even centrally linked to secularism. Soleimani develops the theoretically original idea of the ‘nationalist utterance’ as an Austinian performative, suggesting how nationalisms have legitimized themselves by taking on conventional rhetorical forms modeled on Western nationalisms even when the goals and structures of local nationalisms are quite different  . . .  an important contribution.” (Katherine Ewing, Professor of Religion, Columbia University, USA)