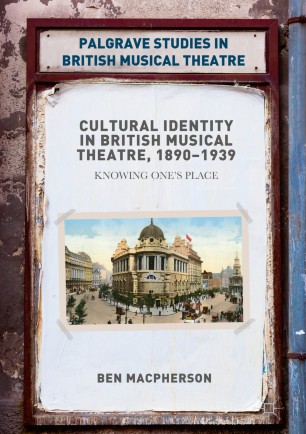 This book examines the performance of ‘Britishness’ on the musical stage. Covering a tumultuous period in British history, it offers a fresh look at the vitality and centrality of the musical stage, as a global phenomenon in late-Victorian popular culture and beyond. Through a re-examination of over fifty archival play-scripts, the book comprises seven interconnected stories told in two parts. Part One focuses on domestic and personal identities of ‘Britishness’, and how implicit anxieties and contradictions of nationhood, class and gender were staged as part of the popular cultural condition. Broadening in scope, Part Two offers a revisionary reading of Empire and Otherness on the musical stage, and concludes with a consideration of the Great War and the interwar period, as musical theatre performed a nostalgia for a particular kind of ‘Britishness’, reflecting the anxieties of a nation in decline.

​Ben Macpherson is Senior Lecturer in Musical Theatre in the School of Media and Performing Arts at the University of Portsmouth, UK. His publications include Voice Studies: Critical Approaches to Process, Performance and Experience (co-edited with Konstantinos Thomaidis, 2015) and he has written widely on both voice studies and British identity in musical theatre.

“A masterly analysis of the various aesthetic forms and the changing social, political and ethical concerns of musical theatre from the last years of the Victorian era to the start of WWII, the book provides a lucid explication of the interrelated nature of popular entertainment and its sociopolitical contexts. It is likely to become required reading for students and scholars of the British musical and of social history.” (Robert Gordon, Professor of Drama, Goldsmiths, University of London, UK)
Buy options