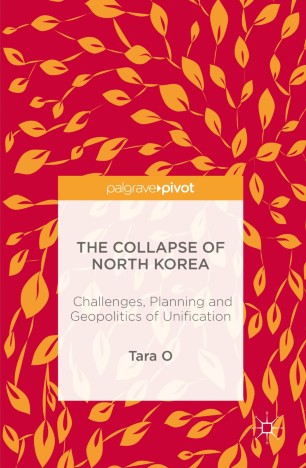 The Collapse of North Korea

Challenges, Planning and Geopolitics of Unification

This book highlights the increasing risk of North Korea’s collapse and considers the necessary actions that would enable the neighboring powers to prepare for such an event. North Korea's deteriorating economic conditions, its reliance on external assistance, and the degree of information penetration all provide hints of its collapse. Whether the chance is high or low, the collapse of North Korea and subsequent Korean unification would drastically alter the geostrategic landscape and profoundly affect the national interests of the regional powers—South Korea, China, the United States, Japan, and Russia. The most desirable scenario for a post-unification Korean Peninsula is a successfully developed and integrated non-nuclear Korea acting as a responsible regional and world stakeholder. This work considers the major challenges expected after a North Korean collapse, including the control of nuclear weapons, disorder in the immediate aftermath of collapse, and economic and social integration. The author then outlines how regional powers need to prepare to handle these challenges in order to minimize suffering and to set the foundation for long-term development and regional stability.

Tara O is an Adjunct Fellow at the Pacific Forum, Center for Strategic and International Studies, USA, and a retired U.S. Air Force officer. She worked in Asia, Africa, Europe, and the U.S. Her assignments included the Pentagon and the U.S.-Republic of Korea Combined Forces Command. She holds degrees from the University of Texas-Austin (Ph.D.), Princeton University (MPA), and University of California-Davis (BA).

“The result is a well-researched, lucid and, for the most part, objective analysis of the steps necessary to prevent a collapsed North Korea from wreaking havoc in Northeast Asia and beyond. … will be of interest to Korea and East Asia specialists, whether from academia or from policymaking. It is recommended for those who want a broad and comprehensive overview of the challenges that Korean reunification would—or will, following from the author’s train of thought—entail.” (Ramon Pacheco Pardo, Pacific Affairs, pacificaffairs.ubc.ca, July, 2017)
Buy options