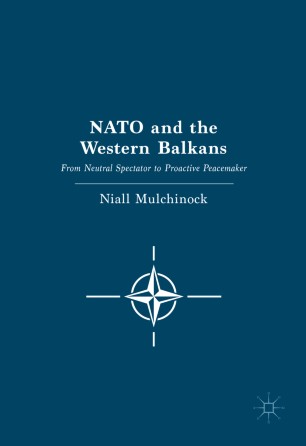 From Neutral Spectator to Proactive Peacemaker

This book provides a critical examination of NATO’s evolving strategic and operational roles in the Western Balkans since the disintegration of Yugoslavia in 1991, with a particular focus on Bosnia, Kosovo and the former Yugoslav Republic of Macedonia, in both the conflict and post-conflict phases.  While there is a myriad of literature available on the various conflicts that engulfed the former Yugoslavia after the collapse of communism, less has been written on NATO’s overall role in these conflicts.  This text, therefore, fills the gap, offering a thematic study of NATO’s roles and duties in this region from the early 1990s to the present day.  The ‘levels of analysis’ introduced by Mulchinock provide a new framework for examining NATO’s response to the Yugoslav wars of secession, focusing on the role of key NATO member states and the role of different NATO Secretaries-General, along with the impact of inter-institutional cooperation (and conflict) with other international organisations.

Niall Mulchinock is a lecturer in the Department of Government at University College Cork (UCC), Ireland.  He completed a BA at UCC in 2005, followed by a Masters in 2006.  He then undertook a PhD in the Department of Government, again at UCC, examining NATO’s involvement in the stabilisation of the Western Balkans since the disintegration of Yugoslavia. His primary research interests lie in the field of international relations, with a particular focus on how NATO has changed and adapted to the new global security environment that emerged after the end of the Cold War.

“The book is a fascinating read for anyone interested in NATO or the Yu­goslav wars. It is a comprehensive study of NATO’s adjustment to the post-Cold War world, its almost reluctant involvement in the military interventions in Yugoslavia, and its subsequent leading role in peace­keeping missions.” (Roos Hoebens, Südosteuropa, Vol. 66 (1), 2018)
Buy options