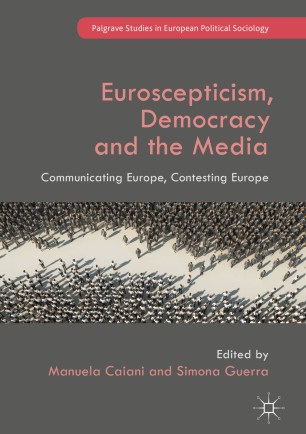 Euroscepticism, Democracy and the Media

This volume focuses on the relationship between the media and European democracy, as important factors of EU legitimacy. The contributors show how the media play a crucial role in making European governance accountable, and how it can act as an intermediate link between citizens and their elected and unelected representatives.

The book focuses on widespread levels of Euroscepticism and the contemporary European crisis. The authors present empirical studies which problematize the role of traditional media coverage on EU attitudes. Comparisons are also drawn between traditional and new media in their influence on Euroscepticism. Furthermore, the authors analyse the impact of the internet and social media as new arenas in which Eurosceptic claims and positions can be made visible, as well as being a medium used by political parties and populist movements which contest Europe and its politics and policies.

Euroscepticism, Democracy and the Media will be of interest to students and scholars with an interest in European politics, political parties, interest groups, social movements and political sociology.

Manuela Caiani is Associate Professor at the Institute of Scienze Umane e Sociali at the Scuola Normale Superiore (SNS), Florence, Italy. She has published widely on collective action and Europeanization and on right-wing extremism in Europe and the USA.

Simona Guerra is Senior Lecturer in Politics in the School of History, Politics and International Relations at the University of Leicester, UK. Her main research interests focus on the domestic politics of EU integration, Euroscepticism and Populism, and Religion and Politics. Her publications include Central and Eastern European Attitudes in the Face of Union (Palgrave Macmillan, 2013).

“The book focuses on the spread or Euroskepticism in Europe, beyond party systems and across civil society, focusing on the role of media negativity and the media coverage of the EU in times of crisis, when Euroskepticism seems to have become mainstream. Another plus of this volume is the analysis of the impact of the internet and social media on Euroskeptical movements, and how they are used to contest EU legitimacy.” (Mihai Sebe, EuropeNow Journal, europenowjournal.org, May, 2017)
Buy options