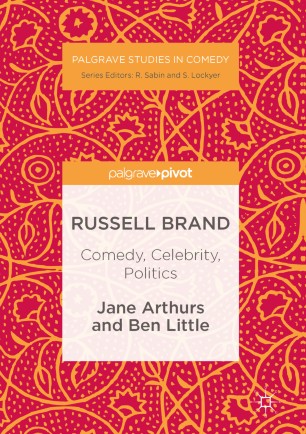 'This is a fantastically exciting book, one which both forensically interrogates the cultural significance of Brand as a comedian but which also places him at the heart of a much bigger intellectual narrative about comic celebrity and its increasing impact on contemporary British politics.'
-Sam Friedman, London School of Economics and author of Comedy and Distinction: The Cultural Currency of a 'Good' Sense of Humour
'How can a celebrity of global stature ‘transform public debate, become an established symbol of activist politics, and then seem to vanish almost without trace’? Arthurs and Little’s remarkable new book tackles this question with transdisciplinary lucidity, unpacking the many meanings of Russell Brand, situating the maverick trickster in broader context, and in the process offering a vibrant and vital resource for all those who want to understand celebrity, contemporary politics and the connections between them.'
Jo Littler, City University, London and author of Against Meritocracy: Culture, Power and Myths of Mobility.
Russell Brand's capacity to reinvent himself is remarkable. This book traces his career through comedy, to TV presenting; radio to Hollywood films. It identifies how his eclectic experience in entertainment both helped and hindered his high-profile move into political activism. It contains sections on the Sachsgate scandal, his controversial interview with Jeremy Paxman and his interview with aspiring Prime Minister Ed Miliband. Underpinning the book are interviews with leading activists and politicians and sophisticated readings of Brand's performances. It builds on the scholarly work of David Marshall, John Street, Oliver Driessens, Nahuel Ribke and others in the area of celebrity politics to develop an original analytic approach that blends the field theory of Pierre Bourdieu with the assemblage theory of Gilles Deleuze and Felix Guattari. This book is essential reading for anyone with an interest in the complex interaction between comedy, celebrity and politics.
Jane Arthurs is Professor in Television at Middlesex University.

Ben Little is Lecturer in Media and Cultural Politics at the University of East Anglia.