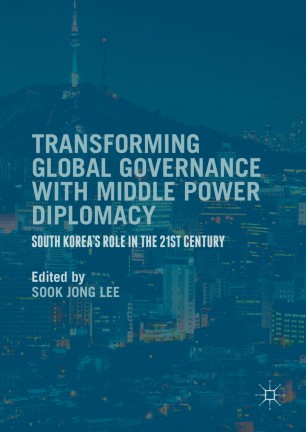 This book examines South Korea’s recent strategic turn to middle power diplomacy, evaluating its performance so far in key areas of security, maritime governance, trade, finance, development assistance, climate change, and cyber space. In particular, the authors pay special attention to how South Korea’s middle power diplomacy can contribute to making the U.S.-China competition in East Asia benefit Korea.
The contributors discuss the opportunities and limits of this middle power diplomacy role, exploring how Korea can serve as a middleman in Sino-Japanese relations, rather than as a US ally against China; use its rich trade networks to negotiate beneficial free trade agreements; and embracing its role as a leader in climate change policy, along with other topics. This book is must read for foreign policy officials and experts who engage in the Asia-Pacific region, rekindling the academic study of middle powers whose influence is only augmenting in our increasingly networked twenty-first century world.

Sook-Jong Lee is the President of the East Asia Institute and a professor of public administration at Sungkyunkwan University. Previously, Dr. Lee was a research fellow at the Sejong Institute, a visiting fellow at the Brookings Institution, and a Lecturer at the School of Advanced International Studies (SAIS) at Johns Hopkins University. Dr. Lee received her masters and doctorate in sociology from Harvard University.