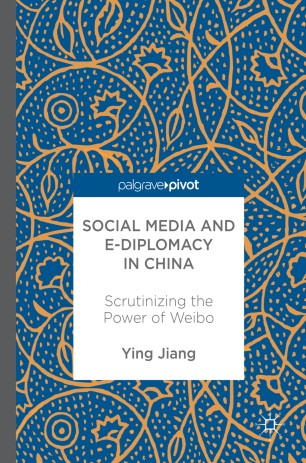 Social Media and e-Diplomacy in China

Scrutinizing the Power of Weibo

As with many spheres of public life, public diplomatic communication is being transformed by the boom of social media. More than 165 foreign governmental organisations in China have embarked on the use of Weibo (a hybrid of Facebook and Twitter in China) to engage with Chinese citizens and reach out to youth populations, one of the major goals of current public diplomacy efforts. This exciting new pivot, based on systemic research of Weibo usage by embassies in China, explores the challenges and the limits that the use of Chinese Weibo (and Chinese social media in general) poses for foreign embassies, and considers ways to use these or other tools. It offers a systematic study of the effectiveness and challenges of using Weibo for public diplomatic communication in and with China. Addressing the challenges of e-diplomacy, it considers notably the occurrence of cyber-nationalism on Weibo and encourages a critical look at its practice, arguing how it can contribute to the goals of public diplomacy.

Dr Ying Jiang is Senior Lecturer at the Department of Media, University of Adelaide, Australia. After being awarded a PhD in 2010, Ying joined Media Discipline at the University of Adelaide and was selected in 2008 as one of the 100 outstanding young Chinese leaders in the world by Hong Kong Dragon Foundation. Ying’s research interests and publications mainly include cyber-nationalism, crosscultural communication, social media and public relations. Ying’s first book was 'Cyber-nationalism in China: Challenging Western Media Portrayal of Chinese Censorship' (2012).