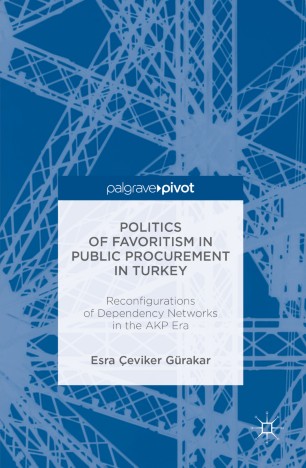 Politics of Favoritism in Public Procurement in Turkey

Reconfigurations of Dependency Networks in the AKP Era

This book provides substantiation to claims of favoritism in public procurement in Turkey in the twenty-first century. Through an analysis of nearly fifty thousand high value contracts between 2004 and 2011, the study indicates that the AKP majority government has used public procurement as an influential tool to increase its electoral success, build its own elites, and finance politics. The use of public procurement for rent creation and distribution is found to be particularly extensive in the construction and services sectors–namely in the TOKİ projects and municipal procurements. In addition, this book demonstrates how the more than 150 legal amendments to the new Public Procurement Law in Turkey, drafted with the pull of the European Union-International Monetary Fund-World Bank nexus, have increased the use of less competitive procurement methods and discretion in awarding contracts. Relying on empirical research, this timely book provides careful, quantitative analysis of datasets in its contentions of favoritism in Turkey’s public procurement process.

“Politics of Favoritism in Public Procurement in Turkey sheds new light into an important aspect of contemporary Turkish politics that has received only scant scholarly attention. In particular, the empirical evidence presented in the book on the firms that succeeded in winning the procurement contracts makes an original contribution to the literature. The book will be especially useful for those interested in political favoritism, clientelism, and patronage in Turkey.” (Sabri Sayarı, Middle East Journal, Vol. 72 (3), 2018)
Buy options