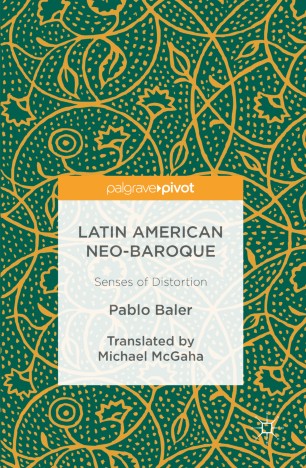 Pablo Baler studies the ruptures and continuities linking the de-centered dynamics of the 17th century to the logic of instability that permeates 20th century visual and literary production in Latin America. Bringing philosophy, literary interpretation, art criticism, and a poetic approach to the history of ideas, Baler offers a new perspective from which to understand the uncanny phenomenon of baroque distortion. This interdisciplinary inquiry not only leads to a more specific formulation regarding the singularity of the reappropriations of the baroque in Spanish America, but also allows for a more comprehensive assessment of its historical reach in the broader context of the representational crisis of modernity.

Pablo Baler is Associate Professor of Latin-American Literature at California State University, Los Angeles, USA and an International Research Fellow at the Centre for Fine Art Research at Birmingham City University, UK. A novelist and cultural critic, Baler is the author of the award-winning novel Circa and the collection of short stories, La burocracia mandarina, as well as the editor of The Next Thing: Art in the Twenty-First Century.