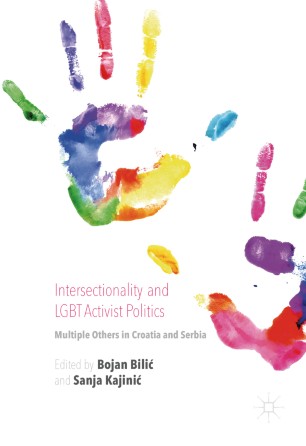 Multiple Others in Croatia and Serbia

This volume combines empirically oriented and theoretically grounded reflections upon various forms of LGBT activist engagement to examine how the notion of intersectionality enters the political context of contemporary Serbia and Croatia. By uncovering experiences of multiple oppression and voicing fear and frustration that accompany exclusionary practices, the contributions to this book seek to reinvigorate the critical potential of intersectionality, in order to generate the basis for wider political alliances and solidarities in the post-Yugoslav space. The authors, both activists and academics, challenge the systematic absence of discussions of (post-)Yugoslav LGBT activist initiatives in recent social science scholarship, and show how emancipatory politics of resistance can reshape what is possible to imagine as identity and community in post-war and post-socialist societies.

This book will be of interest to scholars and students in the areas of history and politics of Yugoslavia and the post-Yugoslav states, as well as to those working in the fields of political sociology, European studies, social movements, gay and lesbian studies, gender studies, and queer theory and activism.

Sanja Kajinić is MIREES academic tutor and lecturer at the University of Bologna, School of Political Sciences, Forlì, Italy.

“This is a brilliant, timely and engaged book, making an original contribution to the growing field of LGBTQ studies. It is extremely rare for a book to address intersecting oppressions so explicitly, focus so strongly on a particularly important geographical space or offer such a rich mix of standpoints, voices and writing styles. The explicit concern with combining academic, research and activist endeavours is carried off with aplomb. This volume is likely to leave a lasting impression on all who read it.” (Paul Stubbs, Institute of Economics, Zagreb, Croatia)