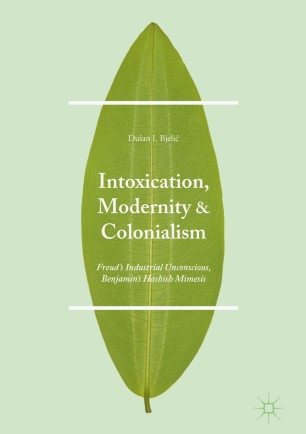 This book depicts how Freud’s cocaine and Benjamin’s hashish illustrate two different critiques of modernity and two different messianic emancipations through the pleasures of intoxicating discourse.  Freud discovered the “libido” and “unconscious” in the industrial mimetic scheme of cocaine, whereas Benjamin found an inspiration for his critique of phantasmagoria and of its variant psychoanalysis in hashish’s mimesis. As part of the history of colonialism, both drugs generated two different colonial discourses and, consequently, two different understandings of the emancipatory powers of pleasure, the unconscious and dreams. Processing cocaine as an undisclosed industrialized scheme of euphoric pleasure, Freud constructed psychoanalysis by infusing its concepts with the residue of cocaine’s euphoria while foreclosing cocaine’s double colonialism its external colonialism, i.e. of Peru, and its internal colonialism, i.e. of the coca plant by industrial chemistry. On the other hand, considering the mimetic powers of Benjamin’s hashish intoxication as an antidote to the intoxicating power of the industrial phantasmagoria while at the same time an industrial colonization of nerves, allows for an opening up of Freud’s cocaine language to the critique of his double unconscious, colonial and industrial.