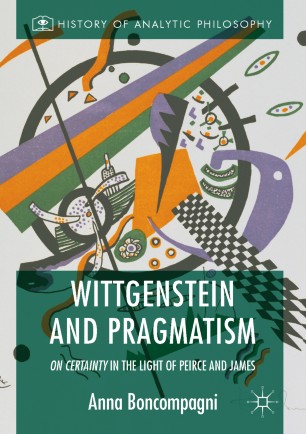 On Certainty in the Light of Peirce and James

This book investigates the conflicts concerning pragmatism in Wittgenstein’s work On Certainty, through a comparison with the pragmatist tradition as expressed by its founding fathers Charles S. Peirce and William James. It also describes Wittgenstein’s first encounters with pragmatism in the 1930s and shows the relevance of Frank Ramsey in the development of his thought. Offering a balanced, critical and theoretical examination the author discusses issues such as doubt, certainty, common sense, forms of life, action and the pragmatic maxim. While highlighting the objective convergences and divergences between the two approaches, the volume makes links to ongoing debates on relativism, foundationalism, scepticism and objectivity. It will be of interest to anyone searching for new perspectives on Wittgenstein’s philosophy.

Anna Boncompagni (University of California, Irvine) works mainly on Wittgenstein’s later philosophy and on pragmatism, and is also interested in phenomenology, the history of analytic philosophy, and the philosophy of psychiatry. Her previous publications include “Elucidating Forms of Life: The Evolution of a Philosophical Tool”, Nordic Wittgenstein Review (2015) and Wittgenstein: Lo Sguardo e il Limite (2012).

“It would be interesting to see how Wittgenstein’s unique style can be derived from a theory-neutral perspective that is perhaps more pragmatic than what was offered by the pragmatists, insofar as it is committed to no theory except to the extent that it helps us to avoid confusions.” (Cayla Clinkenbeard, Graduate Faculty Philosophy Journal, Vol. 39 (2), 2019)