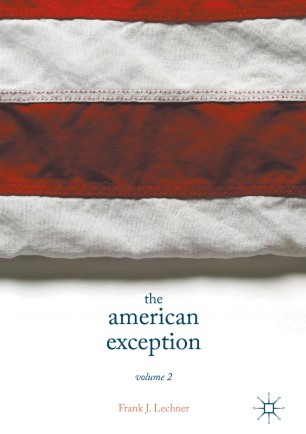 This book examines what makes the United States an exceptional society, what impact it has had abroad, and why these issues have mattered to Americans. With historical and comparative evidence, Frank J. Lechner describes the distinctive path of American institutions and tracks changes in the country’s national identity in order to assess claims about America’s ‘exceptional’ qualities. The book analyzes several focal points of exceptionalist thinking about America, including the importance of US Constitution and the American sense of mission, and explores several aspects of America’s distinctive global impact; for example, in economics and film. In addition to discussing the distinctive global impact of the US, this first volume delves into the economy, government, media, and the military and foreign policy.

Frank J. Lechner is Professor of Sociology at Emory University, USA. He has published World Culture: Origins and Consequences (2004; with John Boli), The Netherlands: Globalization and National Identity (2008), and Globalization: The Making of World Society (2009). With John Boli he edited The Globalization Reader (fifth edition, 2015).