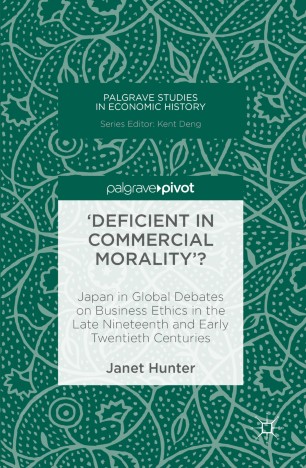 This enlightening text analyses the origins of Western complaints, prevalent in the late nineteenth century, that Japan was characterised at the time by exceptionally low standards of ‘commercial morality’, despite a major political and economic transformation. As Britain industrialised during the nineteenth century the issue of ‘commercial morality’ was increasingly debated. Concerns about standards of business ethics extended to other industrialising economies, such as the United States. Hunter examines the Japanese response to the charges levelled against Japan in this context, arguing that this was shaped by a pragmatic recognition that Japan had little choice but to adapt itself to Western expectations if it was to establish its position in the global economy. The controversy and criticisms, which were at least in part stimulated by fear of Japanese competition, are important in the history of thinking on business ethics, and are of relevance for today’s industrialising economies as they attempt to establish themselves in international markets.

Janet Hunter is Saji Professor of Economic History at the London School of Economics, UK. She has published widely on the economic and social history of modern Japan, and is currently researching on concepts of ethical business practice in developing economies such as Japan, and the economic impact of the 1923 earthquake.