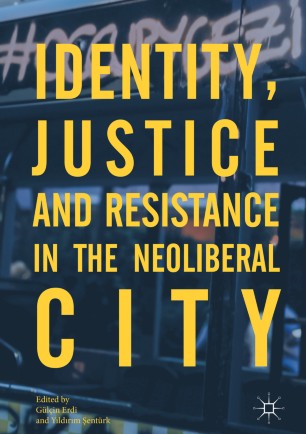 Identity, Justice and Resistance in the Neoliberal City

This book details the current neoliberal restructuring of cities and its impact on the rise and spread of resistance and uprisings in different cities throughout the world. Through close ethnographic study the authors  illuminate the strategies adopted for everyday life that have evolved in response to the neoliberal managing of cities, by which the city is shaped by market forces rather than by the needs of its inhabitants. In the light of many urban movements, uprisings and forms of resistance observed in such diverse countries as Brazil, Turkey, the USA, Greece and Spain since the Arab uprising of 2011, this collection makes an original contribution to urban sociology and social geography by developing a spatial approach to understanding how the city shapes identities and perceptions of (in)justice. This innovative volume will be of interest to readers across the social sciences.

Gülçin Erdi is CNRS Research Fellow at the CITERES (Cities, Territories, Environment and Society) centre, France. Previously a Marie Curie Research Fellow at the University of Warwick, UK, her research focuses on the analysis of contentious politics, spatial dimensions of social movements, and resistance inside the city.
Yıldırım Şentürk is Associate Professor in the Department of Sociology at Mimar Sinan Fine Arts University, Turkey. His research interests include city and social space, transnational studies, neoliberalism, labour and qualitative research, while his current research focuses on work life in Istanbul.

“Identity, Justice and Resistance in the Neoliberal City offers an excellent and timely contribution to the burgeoning literature on cities and how urban inhabitants reshape the urban agenda through their varied forms of resistance and insurgent practices. Editors bring together a rich ethnographically informed collection of experiences of urban struggles in a range of cities around the world ─from Ankara and Istanbul, to Paris, London and post socialist Skopje, to Ahmedabad and Sao Paolo─ to offer a rich yet accessible and integrated account on capacity of individuals and groups to resist, to transform, and sometimes to integrate in, the neoliberal city.  The volume’s introduction and 10 substantive chapters will inspire both activists and academics who dare to imagine an insurgent urbanism and its political potential.” (Faranak Miraftab, Professor of Urban and Regional Planning, University of Illinois at Urbana-Champaign, USA)“Drawing on extensive local fieldwork of fine-grained ethnographic analyses this book brings together studies of neoliberal urbanism with perspectives of city residents, from social movements to everyday resistance and survival practices. Thereby the contemporary neoliberal re-making of a variety of cities from around the world is revealed as spawning surprisingly contradictory effects: occasionally urbanites manage to carve out liberating spaces and agency.” (Margit Mayer, Professor of Political Science, Freie Universität of Berlin, Senior Fellow at the Center for Metropolitan Studies, Technical University Berlin, Germany)
Buy options