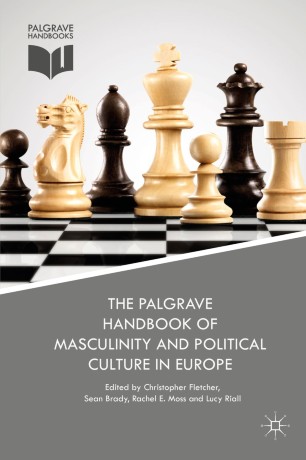 The Palgrave Handbook of Masculinity and Political Culture in Europe

This Handbook aims to challenge ‘gender blindness’ in the historical study of high politics, power, authority and government, by bringing together a group of scholars at the forefront of current historical research into the relationship between masculinity and political power.  Until very recently in historical terms, formal political authority in Europe was normally and ideally held by adult males, with female power being perceived as a recurrent aberration. Yet paradoxically the study of the interactions between masculinity and political culture is still very much in its infancy. This volume seeks to remedy this lacuna by considering the different consequences of the masculinity of power over two millennia of European history. It examines how masculinity and political culture have interacted from ancient Rome and the early medieval Byzantine empire, to twentieth-century Germany and Italy. It considers a broad variety of case studies from early medieval Iceland and late medieval France, to Naples at the time of the French revolution and Strasbourg after the Franco-Prussian war, with a particular focus on the development of political masculinities in Great Britain between the sixteenth century and the present day.

Christopher Fletcher is a chargé de recherche (Assistant Research Professor) in the French National Centre for Scientific Research (CNRS) affiliated to the University of Lille, France. His previous publications include Richard II: Manhood, Youth and Politics, 1377-99 (2008) and Government and Political Life in England and France, c. 1300-c.1500 (2015).
Sean Brady is Lecturer in Modern British and Irish History at Birkbeck College, University of London, UK. His research interest focuses on gender, sexuality, politics and religion in nineteenth and twentieth-century Britain and Ireland. His publications include What is Masculinity? Historical Dynamics from Antiquity to the Contemporary World (Palgrave, 2011), co-edited with John H. Arnold.
Rachel E. Moss is Leverhulme Early Career Fellow at the Faculty of History at the University of Oxford, UK. Her current research project is on late medieval homosociality, and she is the author of Fatherhood and its Representations in Middle English Texts (2013).
Lucy Riall is Professor of the Comparative History of Europe at the European University Institute in Florence, Italy. Her publications include Garibaldi: Invention of a Hero (2007), Under the Volcano: Revolution in a Sicilian Town (2013) and (edited with Valeria Babini and Chiara Beccalossi), Italian Sexualities Uncovered, 1789-1914 (Palgrave, 2015).