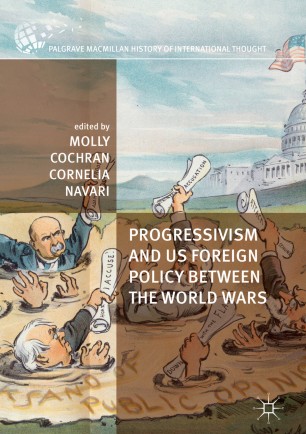 Progressivism and US Foreign Policy between the World Wars

This book considers eleven twelve key thinkers on American foreign policy during the inter-war period. All put forward systematic proposals for the direction, aims and instruments of American foreign policy; all were listened to, in varying degrees, by the policy makers of the day; all were influential in policy terms, as well as setting the terms of contemporary debate. The focus of the volume is the progressive agenda as it was formulated by Herbert Croly and The New Republic in the run-up to the First World War. An interest in the inter-war period has been sparked by America’s part in international politics since 9/11. The neo-conservative ideology behind recent US foreign policy, its democratic idealism backed with force, is likened to a new-Wilsonianism. However, the progressives were more wary of the use of force than contemporary neo-conservatives. The unique focus of this volume and its contextual, Skinnerian approach provides a more nuanced understanding of US foreign policy debates of the long Progressive era than we presently have and provides an important intellectual background to current debates.