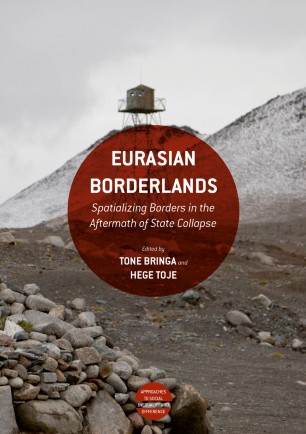 Spatializing Borders in the Aftermath of State Collapse

This book examines changing and emerging state and state-like borders in the post-Soviet space in the decades following state collapse. This book argues border-making is not only about states’ physical marking of territory and claims to sovereignty but also about people’s spatial practices over time. In order to illustrate how borders come about and are maintained, this book looks at border communities at internal, open administrative borders and borders in the making, as well as physically demarcated international state borders. This book also pays attention to both the spatial and temporal aspects of borders and the interplay between boundaries and borders over time and thus identifies some of the processes at play as space is territorialized in Eurasia in the aftermath of state collapse.

“The collapse of the Soviet state ushered in massive political, social, and economic changes that shook the whole world. This collection of essays draws together some of the best scholars in the field to focus on the remaking and rethinking of borders that this entailed, and the implications of that for people’s lives and sense of belonging. Intellectually subtle and ethnographically rich, the book is essential reading for anyone studying transformations in contemporary borders and their social and spatial significance.” (Sarah Green, author of “Notes from the Balkans”)

“Bringa and Toje have put together a fascinating collection that allows the reader to sense the materiality of newly erected borders and to see their impact on people’s daily lives. Documenting contested border histories, the chapters skilfully weave together geopolitical processes across former socialist Eurasia with the biographies of inhabitants living on its crevices. It’s a timely and important intervention which powerfully illustrates the complexities and contradictions of a globalizing world that is spatially fragmented.” (Mathijs Pelkmans, London School of Economics and Political Science, UK)

“This highly innovative collection examines the reorganization of political boundaries that followed the collapse of the Soviet Union. The authors demonstrate how this process of ‘border work’ has profound impacts on the societies inhabiting these border spaces. Eurasian Borderlands is highly recommended for anyone interested in the social, political and geopolitical dynamics of the former Soviet Union.” (Mark Bassin, author of “The Gumilev Mystique”)