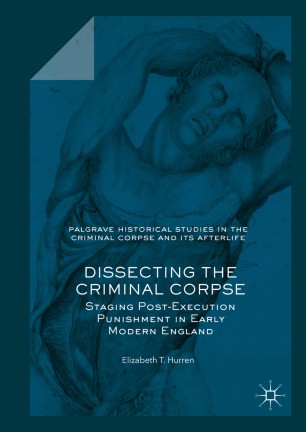 Those convicted of homicide were hanged on the public gallows before being dissected under the Murder Act in Georgian England. Yet, from 1752, whether criminals actually died on the hanging tree or in the dissection room remained a medical mystery in early modern society. Dissecting the Criminal Corpse takes issue with the historical cliché of corpses dangling from the hangman’s rope in crime studies. Some convicted murderers did survive execution in early modern England. Establishing medical death in the heart-lungs-brain was a physical enigma. Criminals had large bullnecks, strong willpowers, and hearty survival instincts. Extreme hypothermia often disguised coma in a prisoner hanged in the winter cold. The youngest and fittest were capable of reviving on the dissection table. Many died under the lancet. Capital legislation disguised a complex medical choreography that surgeons staged. They broke the Hippocratic Oath by executing the Dangerous Dead across England from 1752 until 1832.
This book is open access under a CC-BY license.

Elizabeth T. Hurren is Reader in the Medical Humanities at the University of Leicester, UK, and an expert on the history of the body, medicine, poverty and welfare in Europe from early modern to modern times. She has published two major books since 2007, Protesting about Pauperism: Poverty, Politics and Poor Relief in Late-Victorian England and Dying for Victorian Medicine: English Anatomy and Its Trade in the Dead Poor, c. 1832 to 1929.