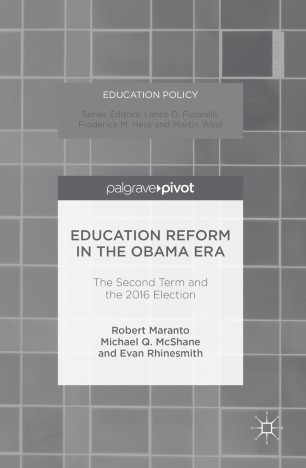 Education Reform in the Obama Era

The Second Term and the 2016 Election

This book offers a sophisticated overview of President Obama’s education agenda, exploring how and why education policy became national and ultimately presidential over the past seven decades. The authors argue that the Obama education agenda, though more ambitious, is broadly in line with those of recent presidencies, reflecting elite views that since substantial increases in spending have failed to improve equity and achievement, public schools require reforms promoting transparency such as the Common Core national standards, as well as market based reforms such as charter schools. While sympathetic to President Obama’s goals, the authors argue that the processes used to implement those goals, particularly national standards, have been hurried and lacked public input. The Obama administration’s overreach on school reform has sparked a bipartisan backlash. Even so, Maranto, McShane, and Rhinesmith suspect that the next president will be an education reformer, reflecting an enduring elite consensus behind school reform.