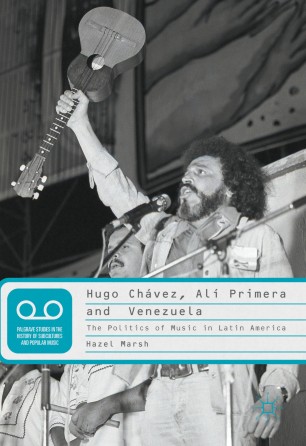 The Politics of Music in Latin America

Unlike much of the literature on Venezuela in the Chávez period, this book shifts focus away from 'top down' perspectives to examine how Venezuelan folksinger Alí Primera (1942-1985) became intertwined with Venezuelan politics, both during his lifetime and posthumously. Alí’s ‘Necessary Songs’ offered cultural resources that enabled Chávez to connect with pre-existing patterns of grassroots activism in ways that resonated deeply with the poor and marginalised masses. Official support for Alí’s legacy led the songs to be used in new ways in the Chávez period, as Venezuelans actively engaged with them to redefine themselves in relation to the state and to reach new understandings of their place within a changed society. This book is essential reading not only for those interested in popular music and politics, but for all those seeking to better understand how Chávez was able to successfully identify himself so profoundly with the  Venezuelan masses, and they with him.

Hazel Marsh is Lecturer in the School of Politics, Philosophy, Language and Communication Studies at the University of East Anglia, UK. She has researched, and published on, popular music and the Mexican student movement, Venezuelan cultural policy in the Chávez period, resistance music in Oaxaca, Mexico, and representations of British Gypsies.