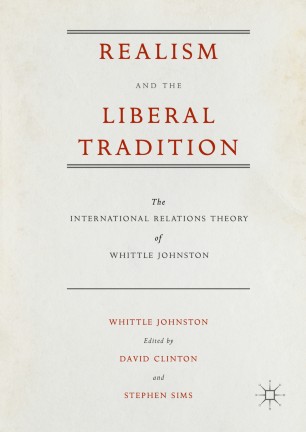 Realism and the Liberal Tradition

This book presents a posthumous collection of previously uncollected works of political theory written by Whittle Johnston. Johnston believed that both the liberal tradition of political thought and the realist tradition of international thought had contributed much to humanity’s store of political wisdom, but that each had limitations that could most easily be recognized by its encounter with the other. His method of accomplishing this task was to examine the liberal conception of political life in general and international political life in particular and then to explore the realist critique of the liberal view, particularly as it was expressed by three great twentieth-century realist thinkers, all of whom were, in their various ways, skeptical of liberal assumptions: Reinhold Niebuhr, Hans Morgenthau, and E. H. Carr. In doing so, Johnston reveals the power of the realist outlook, but also the areas in which it remains insufficient, and insufficient particularly where it underestimates the complexity and prudence that liberalism is capable of displaying. There have been studies of both liberalism and realism, but no other work has put them into conversation with each other in the way that this book does.