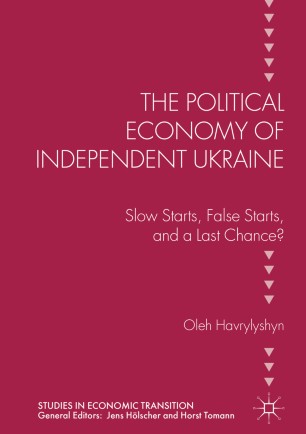 The Political Economy of Independent Ukraine

Marking the 25th anniversary of Ukraine as a sovereign nation, this book traces its economic transformation since 1991. Post-communist transition has been a highlight of recent history, and Ukraine stands out as one of its most interesting and puzzling cases. Havrylyshyn offers the first comprehensive treatise on the entire period, providing a thorough description of the slow evolution of economic reforms, exploring how and why performance in this regard fell far behind the leaders in transition. Testing several conventional hypotheses, the author argues that while Russian imperialism may form part of the explanation, the self-serving interests of domestic elites and new oligarchs may be even more important. Radically revising the traditional argument that reforms were delayed to allow nation building, this book contends that it was due more to the interests of the non-lustrated elite, who needed time to become the new capitalists.

Oleh Havrylyshyn lectures at the Munk School of Global Affairs, University of Toronto, Canada, and the George Washington University, Washington DC, USA. Until 2015, he was advisor to senior officials in the Ukrainian Government. He has served as Ukraine’s Deputy Minister of Finance, and was a senior official at the Board of Directors and Management of the IMF.

“Finally, a book that explains not only the politics, but also the economics of the place that finds itself at the forefront of current battles over the future of Europe. Written by one of the leading experts on the post-Soviet space, The Political Economy of Independent Ukraine is a must-read for everyone interested in the present and future of Eastern Europe, as well as the prospects of the European Union’s relations with Russia.” (Serhii Plokhii, Harvard University, USA)

“Oleh Havrylyshyn belongs to the leading group of researchers on post-socialist transition, and has written widely and wisely on this topic. This is a magnificent study on Ukraine.  A must-read for economists, historians and political scientists interested in post-1991 developments in this country, and – more broadly – in comparative studies of post-socialist transformation.” (Leszek Balcerowicz, Warsaw School of Business, Poland)