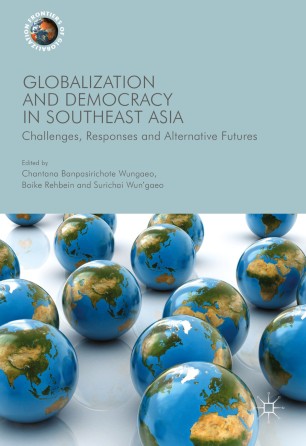 Globalization and Democracy in Southeast Asia

Part of the Frontiers of Globalization book series (FOG)

This book questions why Southeast Asian nation states are struggling to adopt full-fledged liberal democracy and attempts to better understand the relationship between globalization and models of democracy.

Through country studies and a comparative analysis, the chapters offer ideas as to how globalization and democracy in the region should be shaped in the decades to come. Country studies are covered mostly by native Southeast Asian scholars who analyse recent developments as well as specific concerns that have arisen from political crises, citizen uprisings, ethnic identity politics, political reforms, social justice and inequality, and the persistence of the political elite.  The collection highlights factors which have impacted the different regional and national paths taken such as: the legacy of the Cold War, rapid economic development and liberalization, external economic globalization, the important role of informal politics, powerful elites, and weak but emerging middle classes.

This book will be of interest to scholars and students of regional studies of Southeast Asia, Democracy, Sociology, Politics and Globalization Studies.

Boike Rehbein is Professor of Sociology of Asia and Africa at Humboldt University, Germany.