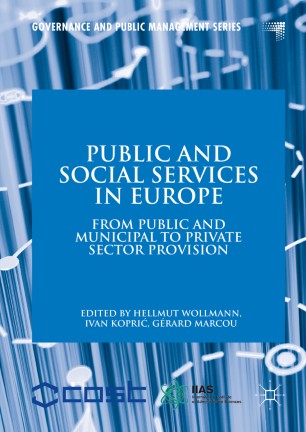 Public and Social Services in Europe

From Public and Municipal to Private Sector Provision

Part of the Governance and Public Management book series (GPM)

‘This impressive volume is an outstanding contribution to comparative research into local service provision from an international and over time perspective. It brings together scholars of the first rank and includes country analyses from almost all European regions. The book is a must-read for all who are interested in local government studies, public management and public sector reforms in Europe.’

‘Public and Social Services in Europe is an essential guide to the rapidly changing worlds of public service delivery across Europe. It highlights not just the debates over privatisation but intriguingly those over the renaissance of cooperatives and citizens movements in providing services outside established statutory frameworks.’

This book presents comparative analyses and accounts of the institutional changes that have occurred to the local level delivery of public utilities and personal social services in countries across Europe. Guided by a common conceptual frame and written by leading country experts, the book pursues a “developmental” approach to consider how the public/municipal sector-centred institutionalization of service delivery (climaxing in the 1970s) developed through its New Public Management-inspired and European Union market liberalization-driven restructuring of the 1980s and early 1990s. The book also discusses the most recent phase since the late 1990s, which has been marked by further marketization and privatization of service delivery on the one hand, and some return to public sector provision (“remunicipalization”) on the other. By comprising some 20 European countries, including Central East European “transformation” countries as well as the “sovereign debt”-stricken countries of Southern Europe, the chapters of this volume cover a much broader cross section of countries than other recent publications on the same subject.

Ivan Koprić is Professor and Head of Chair of Administrative Science and Local Governance at the Faculty of Law, University of Zagreb, Croatia, and President of the Institute of Public Administration in Zagreb.