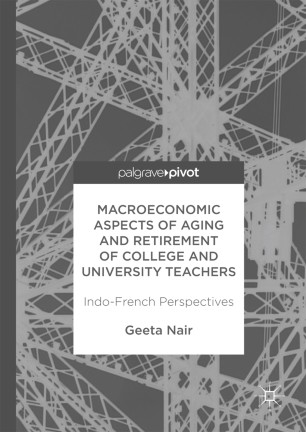 Macroeconomic Aspects of Aging and Retirement of College and University Teachers

This book explores the universal and highly topical issues of ageing and retirement. It places a particular focus on the macroeconomic aspects of the ageing and retirement of college and university teachers, through a case study of teachers and professors in France and India. While the ageing of the population and the financing of the pension system are notoriously pressing issues in Western nations such as France, it has previously not been acknowledged that these issues are also critical to the development trajectory of emerging countries such as India. The book also highlights the importance of pensions for welfare, well-being and stability in all categories of workers, including workers in the informal sector and private companies devoid of pension schemes, where jobs are largely irregular and temporary in nature. It will be of great interest to researchers in the fields of comparative education, sociology and economics.

Geeta Nair is Director for Research Initiatives at H.R. College of Commerce and Economics, covering a span of 25 years in teaching and research.

“The ageing of the population and the financing of the pension system are burning matters in developing nations, such as France. What is less known, is that these issues are also critical to the development trajectory of emerging countries, such as India. The parallel between the two countries is thus very original and potentially path-breaking. Geeta Nair skilfully and masterfully compiled a deep, probing, and honest comparative survey between France and India by focusing on the role of ageing and rising life expectancy in the arena of higher education, constantly having in mind the promotion of human development and welfare.” (Marc Pilkington,  Associate Professor of Economics, University of Burgundy, France)
Buy options