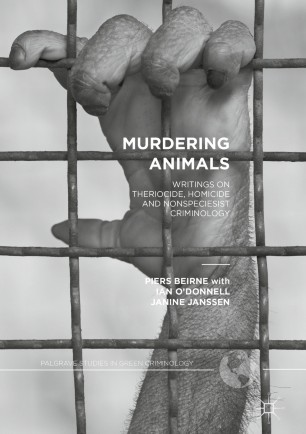 Murdering Animals confronts the speciesism underlying the disparate social censures of homicide and “theriocide” (the killing of animals by humans), and as such, is a plea to take animal rights seriously. Its substantive topics include the criminal prosecution and execution of justiciable animals in early modern Europe; images of hunters put on trial by their prey in the upside-down world of the Dutch Golden Age; the artist William Hogarth’s patriotic depictions of animals in 18th Century London; and the playwright J.M. Synge’s representation of parricide in fin de siècle Ireland. Combining insights from intellectual history, the history of the fine and performing arts, and what is known about today’s invisibilised sites of animal killing, Murdering Animals inevitably asks: should theriocide be considered murder? With its strong multi- and interdisciplinary approach, this work of collaboration will appeal to scholars of social and species justice in animal studies, criminology, sociology and law.

Piers Beirne is Professor of Sociology and Legal Studies at the University of Southern Maine, USA. The founder of nonspeciesist criminology, he is recognized as a leading scholar in green criminology and animal abuse studies.

“The central argument that brings this book together is that animals have a right to live their lives free from humanity’s needs, wants or presumed supremacy over them. … This book is suitable for criminologists and for scholars who study legal issues and animals, as well as animal rights activists, humanities’ scholars and artists who have depicted injustices toward animals.” (Shannon T. Grugan, Criminal Law and Criminal Justice, clcjbooks.rutgers.edu, February, 2019)​
Buy options