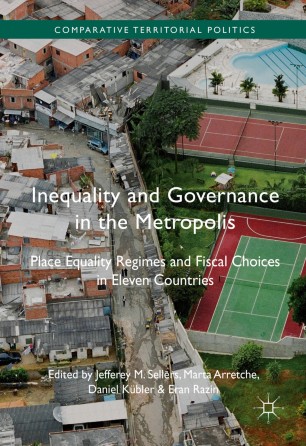 Inequality and Governance in the Metropolis

This book undertakes the first systematic, multi-country investigation into how regimes of place equality, consisting of multilevel policies, institutions and governance at multiple scales, influence spatial inequality in metropolitan regions. Extended, diversified metropolitan regions have become the dominant form of human settlement, and disparities among metropolitan places figure increasingly in wider trends toward growing inequality. Regimes of place equality are increasingly critical components of welfare states and territorial administration. They can aggravate disparities in services and taxes between sub-national jurisdictions, or mitigate and compensate for local differences. The volume examines these regimes in a global sample of eleven democracies.  The cases encompass unitary and federal states as well as developed and developing countries, with examples from Europe, North America, South America, the Middle East, Africa and Asia. The analyses reveal new dimensions of efforts to grapple with growing inequality around the world, and a variety of institutional blueprints to address one of the most daunting challenges of twenty-first century governance.

Jefferey Sellers is Professor of Political Science and Public Policy at the University of Southern California, USA. The author of Governing from Below: Urban Regions and the Global Economy (2005), he is the co-founder and co-director of the International Metropolitan Observatory (IMO), the largest international network for the study of metropolitan regions and their politics, of which this book is the third collective publication.

Daniel Kübler is Professor of Political Science and Director of the Center for Democracy Studies at the University of Zurich, Switzerland. He is co-director of the International Metropolitan Observatory.

Eran Razin is Professor of Geography, the Leon Safdie Chair in Urban Studies, Director of the Institute of Urban and Regional Studies and Head of Floersheimer Studies, at the Hebrew University of Jerusalem, Israel.

“I much enjoyed this book and found it a stimulating and informative read that generated new ideas for further research. It also fills an important gap in the ‘metropolitan debate’ by linking intra-metropolitan perspectives to those of international, global comparison and a concern with global processes in which cities take an increasingly more pre-eminent role. … I certainly would recommend this book as an engaging, thought-provoking and informative read.” (Tassilo Herrschel, Regional Studies, Vol. 53 (12), 2019)