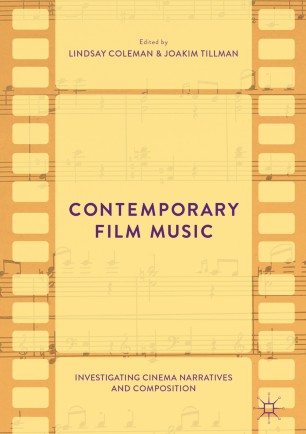 ‘Contemporary Film Music is an outstanding contribution to the documentation of the profound shifts in film scoring that have occurred in this new century. Thoughtful and provocative essays alternate with fascinating interviews with some of those composers working in this new reality. Highly recommended…’
- Mychael Danna, Academy Award-winning film composer, Canada.


The purpose of this book, through its very creation, is to strengthen the dialogue between practitioner and theorist. To that end, a film academic, a composer, and a composer/musicologist have collaborated as editors on this book, which is in turn comprised of interviews with composers alongside complementary chapters that focus on a particular feature of the composer’s approach or style, written by a musicologist or film academic who specializes in that particular element of the composer’s output. In the interview portions of this book, eight major film composers discuss their work from the early 1980s to the present day. The focus is on the practical considerations of film composition, the relationship each composer has with the moving image, technical considerations, personal motivations in composing, the relationships composers have with their directors, and their own creative processes. Contemporary Film Music also explores the contemporary influence of electronic music, issues surrounding the mixing of soundtracks, music theory, and the evolution of composers’ musical voices.
Lindsay Coleman is a film academic and an independent documentary producer. His most recent books include Sex and Storytelling in Modern Cinema and The Philosophy of Pornography. In addition to these, he is working on a series of books on cinematography, film editing, musical composition for films, and visual effects in modern cinema. Lindsay is also working on documentary projects on Hollywood film editing and Australian film cinematography.
Joakim Tillman is Associate Professor in musicology at Stockholm University. His research has appeared in numerous scholarly journals and edited volumes, for instance the essay “Postmodernism and Art Music in the German Debate” in Postmodern Music/Postmodern Thought (2002). His current research is focused on the film music of Elliot Goldenthal, James Horner, and Hans Zimmer.

Lindsay Coleman is an independent film academic, journalist and educator. He is the author of Transnational Cinematography Studies (2017) and Sex and Storytelling in Modern Cinema (2015). Coleman is working on a series of books on modern cinema and also a documentary series on the history of visual effects.

Joakim Tillman is Associate Professor in Musicology at Stockholm University, Sweden. His research has appeared in numerous scholarly journals and edited volumes, for instance the essay Topoi and Intertextuality: Narrative Function in Hans Zimmer’s and Lisa Gerrard’s Music to Gladiator in Music in Epic Film: Listening to Spectacle (2017).