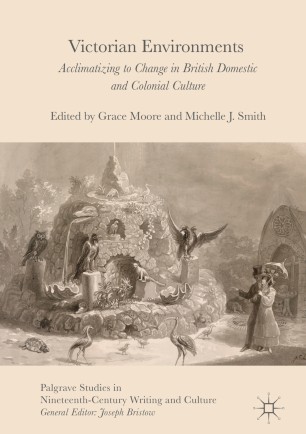 Acclimatizing to Change in British Domestic and Colonial Culture

This collection will draw attention to new ideas in both Victorian studies and in the emerging area of literature and the environment. Adopting a broad interpretation of the term ‘environment’ the work aims to draw together new approaches to Victorian texts and cultures that conceptualise and are influenced by environments ranging from rural to urban, British to Antipodean, and from the terrestrial to the aquatic.With the pressures of industrialism and the clustering of workers in urban centres, the Victorians were acutely aware that their environment was changing.  Torn between nostalgia for a countryside that was in jeopardy and exhilaration at the rapidity with which their surroundings altered, the literature and culture produced by the Victorians reflects a world undergoing radical change. Colonization and assisted emigration schemes expanded the scope of the environment still further, pushing the boundaries of the ‘home’ on an unprecedented scale and introducing strange new worlds. These untamed physical environments enabled new freedoms, but also posed challenges that invited attempts to control, taxonomize and harness the natural world. Victorian Environments draws together leading and emerging international scholars for an examination of how various kinds of environments were constructed, redefined, and transformed, in British and colonial texts and cultures, with particular attention to the relationship between Australia and Britain.